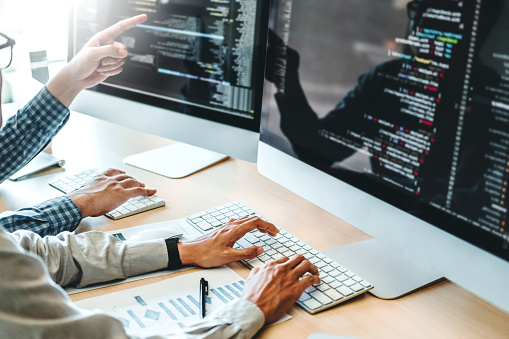 The font is built using the canvas element

The JavaScript code draws individual glyphs, their outlines and shadows on it. Each character has its own HTML file with a single CSS class which styles all four corners in different ways depending if they are straight or have beveled edges. This makes sure that there’s always at least one corner touching another while drawing characters next to each other without gaps between them, just like real fonts work! It also takes care about the vertical rhythm by aligning everything to the baseline grid.

How can developers create their own typeface?

It’s easy! Even non-developers could do it with a little assistance from Google. It doesn’t require any graphic design skills or advanced programming knowledge either. The custom fonts work across multiple browsers on Windows, Mac OS X, iOS, Android even Internet Explorer (up to version 10). And it’s responsive too so everything scales nicely for mobile devices without getting blurry text or losing the special treatment that comes with using your own font files instead of relying on web fonts hosted elsewhere online.

This is all possible through 10 lines of code and the use of Google’s WebFont Loader. It gives you a lot more control over how your fonts are loaded, which characters they support and even lets you download them as woff files directly from your server if that floats your boat. Best yet, it only takes lines or less with minimal changes needed after each release. I’ve been using this method for several years now on my own websites so feel free to check out some live examples here:

Fonts are a simple way to add style and personality to your website.

10 Lines of Code is an open source library that enables you to create fully customizable fonts with only 10 lines of code! This means no more Photoshop, Illustrator or Sketch files needed just plain old HTML and CSS.

They allow us to have beautiful typography on our websites, and can really enhance the design with a good font choice. Unfortunately, they’re often hard.

But what if you could build your own fonts? Yes it is possible! There are different ways you can do this right in HTML/CSS without using images or SVGs. Let me show you how I built my newest project called “Odin Project” which uses 10 lines of code to make an awesome customizable webfont. Using only 10 lines of CSS we create one single glyph where all characters share the same x height but differ in width depending on respective character codes. To get the desired result I did not have to write a single line of JavaScript or use any images.

Define all of the features

You want to support in order to create this amazing customizable font. support capital letters or numbers because they aren’t that useful with such small text. You also don’t have time to draw every single unicode symbol so make sure it’s only the most important ones like different types of punctuation and basic math symbols (see below).

Choose an appropriate typeface as your base (or ‘parent’) font.

The parent will be used as the default state/style which depending on what glyphs are used in the 10 lines, will vary. For example using a sans-serif parent font is probably better than say serif because there are more glyphs to play with like numbers and punctuation.

Make sure your lines of code fit within an 80×80 area for best results (this is where that 10 pixels per line comes in handy). Keep adding/subtracting glyphs until you have something cool

Make it awesome by customizing some options!

The `$options` parameter can be used to change some default settings right before the text gets rendered on screen. You don’t need many things but what’s available includes ‘size’ which controls how big the final text will be (default is 10 pixels), ‘color’ which controls the color of your font in hex, and ‘fontFamily’ which changes the default font used in cases where there isn’t a glyph for certain characters.

7 Tips for Entertaining at a Tech Fashion Party

The Insider’s Guide to Managing Your Research Assistant